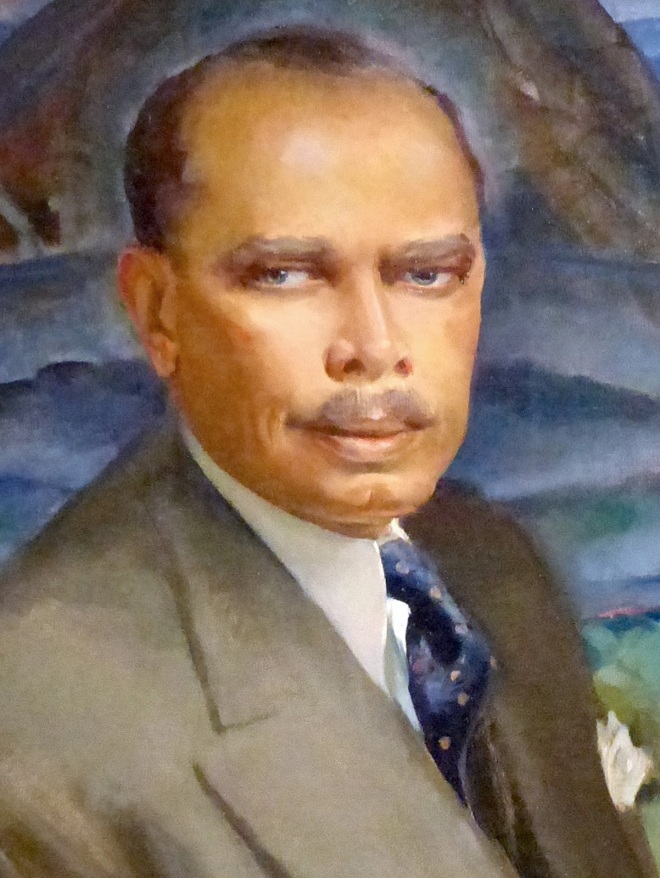 Oh, that mankind had less of Brain and more of Heart,
Oh, that the world had less of Trade and more of Art;
Then would there be less grinding down the poor,
Then would men learn to love each other more;
James Weldon Johnson – Excerpt from Art vs Trade

Eternities before the first-born day,
Or ere the first sun fledged his wings of flame,
Calm Night, the everlasting and the same,
A brooding mother over chaos lay.
And whirling suns shall blaze and then decay,
Shall run their fiery courses and then claim
The haven of the darkness whence they came;
Back to Nirvanic peace shall grope their way.

So when my feeble sun of life burns out,
And sounded is the hour for my long sleep,
I shall, full weary of the feverish light,
Welcome the darkness without fear or doubt,
And heavy-lidded, I shall softly creep
Into the quiet bosom of the Night.

James Weldon Johnson was a renaissance man.  Born in south Florida he was raised to look beyond the barriers of a troubled America post civil war and strive to grasp the dream that emancipation embodied.  Raised by a father who was a free Virginian and Jamaican Mother he would push beyond the racism of the Jim Crow south.  He was a graduate of the University of Atlanta and went on to become the first African American to pass the bar exam in the state of Florida. Johnson was an educator, novelist, poet, song writer, musician, diplomat and civil rights leader.   Johnson and his brother co-wrote the song Lift Every Voice and Sing which became an anthem for the NAACP and the civil rights movement.  He was appointed by President Theodore Roosevelt to diplomatic positions in 1906 in Venezuela and Nicaragua and upon returning in 1914 became involved in the NAACP, eventually serving as its president from 1920 to 1930.

Johnson focused on the arts in retirement, primarily his writing.   Known as a key figure in the Harlem Renaissance movement over his lifetime he published poetry, novels and stories that helped shape the broader cultural legacy of America.   He died at the age of 67 in a car accident in Maine.

Johnson is just one of many African American writers who wrote sonnets during the early 20th Century.   It may sound odd to connect sonnets to part of the tradition of the Harlem Renaissance, but lyric poetry was still the standard by which literature was judged and writers like Johnson, Claude McKay, Paul Lawrence Dunbar and H. Cordelia Ray and others used them to reach across cultural divides and share their poetic vision, while challenging the dominant racist white culture to think differently and inspire their community of color.   Johnson also wrote playfully, in free verse and in rhyme.   He published in a wide range of poetic forms.

I find his final two lines in A Poet To His Son a bit confusing, double negatives scramble things and it makes the entire poem strange.   When I read double negatives I translate it to understand it as a positive, so one way to read it is for me take both out, which would change what he saying to; “Son you can begin too young to be a poet.”  I don’t agree.  You can never be too young to begin to be a poet.  Everyone utters poetry all the time, thinks poetry, from our first word to our last.  And so it left me scratching my head and was a very unsatisfying poem. I disagree with almost all of the advice he gives to his son. Is it sarcasm when he says; Poets these days are unfortunate fellows?  Is Johnson writing in first person but intending that it not be his voice but the worlds?  Or was Johnson sincere and wanting his son to not follow in his footsteps?  What do you think Johnson is saying in the poem below?

A Poet to His Baby Son

I say cursed with your father’s mind,
Because you can lie so long and so quietly on your back,
Playing with the dimpled big toe of your left foot,
And looking away,
Through the ceiling of the room, and beyond.
Can it be that already you are thinking of being a poet?

Why don’t you kick and howl,
And make the neighbors talk about
“That damned baby next door,”
And make up your mind forthwith
To grow up and be a banker
Or a politician or some other sort of go-getter
Or—?—whatever you decide upon,
Rid yourself of these incipient thoughts
About being a poet.

For poets no longer are makers of songs,
Chanters of the gold and purple harvest,
Sayers of the glories of earth and sky,
Of the sweet pain of love
And the keen joy of living;
No longer dreamers of the essential dreams,
And interpreters of the eternal truth,
Through the eternal beauty.
Poets these days are unfortunate fellows.
Baffled in trying to say old things in a new way
Or new things in an old language,
They talk abracadabra
In an unknown tongue,
Each one fashioning for himself
A wordy world of shadow problems,
And as a self-imagined Atlas,
Struggling under it with puny legs and arms,
Groaning out incoherent complaints at his load.

My son, this is no time nor place for a poet;
Grow up and join the big, busy crowd
That scrambles for what it thinks it wants
Out of this old world which is—as it is—
And, probably, always will be.

Take the advice of a father who knows:
You cannot begin too young
Not to be a poet.

One thought on “Mother Night”