She tells me she doesn’t leave her room much anymore.
Is sleeping.  Cannot stay awake.
Cannot remember if she dreams.

I picture her auburn hair, how she pushed it back
from her cheek, hair she no longer has.
Shut my eyes tight and I can see

the way the sun spilled on her floor, smell
autumn in her hair.  Shut my mouth and I can taste
the milk of every word she’s swallowed

to protect me from this.  She never told me
life could feel like drowning;
holding my breath, no shore in sight.

She never told me knowledge could feel
like shards of coral
buried carefully under skin.

She never told me sadness
could cement my heart,
each new sorrow thicker than the last.

All I know is that our bodies betray us.
And in the end, all we leave
are teeth and ash, love and bones.

There are some poems that stick with me, find a place inside my brain and take up residence. Julia Klatt Singer’s poem Calcium is one such poem. This poem reminds me of William Stafford’s best poetry, honest, raw, powerful and haunting. In my opinion, men can never completely understand the relationship that exists between mothers and daughters. It’s not that we are incapable of loving in our own way or being deeply observant of those ties, it’s that we do not have the ability to bring life into this world and then pass it to the next generation and by so doing cement a connection, an umbilical cord that remains tethered, though invisible between them. Good Mothers have two wombs, one in which life is conceived and nurtured to birth and another which lovingly protects their children as best they can for the rest of their lives.

I was in Tampa, Florida last week, and east of there lies the bone valley, named for the rich deposits of phosphate ore, the fossilized remainders of marine animals whose bones and teeth sunk to the bottom of a shallow ocean millions of years ago. Bones and teeth are comprised of calcium phosphate, something that might surprise you if you associate phosphorus only as the currency of energy in plants and animals.

A brief biology lesson. Every living cell of plants and animals are powered by the release of energy stored in the compound called adenosine triphosphate or ATP. ATP is produced in chloroplasts in plants and in mitochondria in animals. Chloroplasts and mitochondria are called organelles, tiny structures that exist within cells to provide the energy and raw materials to keep cells alive and functioning for the purpose they were designed to support the whole of that individual living being.

Mitochondria are curious little structures within our bodies.  They have a distinction of having their own genetic DNA structure, which resembles more a foreign invader from millions of years ago that decided to work together within a larger multi-celled organism to provide synergies that would power the evolution of all higher organisms on our planet.  A mitochondria’s DNA is a crude circle, akin to more a bacteria’s than higher organisms like plants and animals.  In humans mitochondrial DNA is only passed on from your mother, which means we can trace all of our lineages back to a common theoretical Eve or a small handful of Eve’s based on the similarity of our mitochondrial DNA.   There are somethings only mother’s can do and providing the capability to power our cells with ATP is one of them.

What makes energy transfer by ATP possible to power respiration and cellular repairs is the release of energy as it is degraded to ADP, adenosine diphosphate within the mitochondria. As these compounds are literally the fuel at the cellular level of all higher living organisms the availability of phosphorus is a requirement for either uptake by plant roots, or digested in the food that animals eat if both are going to have adequate supply for a healthy life.

Phosphorus is present in all soils to some extent, but native soils throughout much of the world in both the tropics and the high plains are often very low in phosphate levels, low enough to severely limit the productivity of those soils.

Phosphorus was discovered 350 years ago by Hennig Brand in Hamburg Germany in 1669.  He did so by boiling down 60 buckets of urine to find out what was present and discovered phosphorus. Phosphorus is not a component of gun powder, but is a source of ignition, safety matches ignite due to the extreme reactivity of phosphorus with the potassium chlorate in the matchhead. 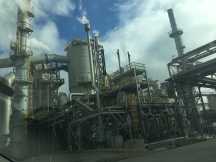 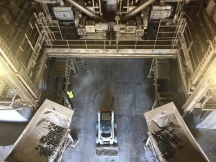 The Mosaic Company is the largest manufacturer of phosphate fertilizer in the world currently and supplies approximately 50 percent of the dry phosphate fertilizer to North America used to provide balanced crop nutrition to support the most productive farmland in the world. The process of making that fertilizer is truly a feat of human ingenuity, from the mining and reclamation process, to the separation of the phosphate containing ore from the matrix of sand and clay in which it is found, to the production of phosphoric acid by taking the phosphate pebble and pulverizing it into a fine powder and then reacting it with sulfuric acid to produce gypsum, calcium sulfate, and phosphoric acid. The phosphoric acid is then reacted with ammonia in a very specific mole ratio to produce either Monoammonium phosphate, MAP or diammonium phosphate, DAP, both forms of plant available dry phosphorus fertilizer that are effective in supporting greater productivity and greater profitability for farmers all over the world.

Poetry is also a form of stored energy.  It awaits suspended, within the pages of a book, for you to absorb it, to nourish you in ways you never expected and then power your cells with energy, power your brain, power your soul to light up and shine.  I doubt that Klatt Singer consciously thought of a connection between her poems Calcium and Phosphorus, though they lie in her volume of poetry Elemental separated by only one poem, Chlorine, trace amounts of which are trapped in the calcium phosphate ore. That’s the beauty of poetry, each reader brings a different perspective to the connections the poet’s lines make in our lives. Each of us find the energy stored within and release it to feed us for another day.

Enjoy the poem Phosphorus below and I encourage you to go to the Prolific Press website and order a copy of Elemental for yourself.  Love and friendship are elemental. Poetry is elemental.  Become elemental in your thinking and it will take you to what’s important.

On the overnight ferry

from Copenhagen to Oslo, we slip
through the narrow channel
heading further north than
I have ever been before.
The Baltic Sea as dark as
the sky and colder.

Around midnight,
little glowing jellyfish swirl
in the wake. The night sky
clouded over – the sea
full of stars.

Poems  from Elemental, Prolific Press 2018.  Used by permission of the author.

I am a life-long Minnesotan who resides in Minneapolis. I hope you enjoy my curated selection of sonnets, short poems and nerdy ruminations. View all posts by A Sonnet Obsession

One thought on “Holding My Breath, No Shore In Sight”